It's been a lot of work and not much playing lately. All management has been busy getting ready for a voluntary inspection by the Arizona OSHA team. By passing, Forever Resorts North Rim earns a coveted designation which few companies have passed. Voluntary Protection Program (VPP) exempts the North Rim from OSHA inspections for three years and puts a feather in Forever Resort's cap. The OSHA team was here this past week and it looks like Forever Resorts North Rim will gain the VPP designation.
We did make it over to Saint George, Utah two weeks ago to have the truck serviced, and if you remember a couple of blogs ago we blew a tire, so I wanted two new tires for the truck. We accomplished all the truck stuff at the Saint George Ford and then headed to WalMart to shop for the last month that we are here.
Sherri and I did get in one hike from Point Imperial to the Saddle Mountain Wilderness trail-head. Point Imperial is the highest point at the North Rim, 8,803'. The views to the east are fantastic and the Aspens are golden. Here are few photos from the hike: 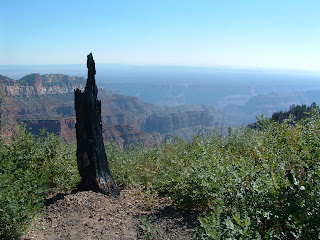 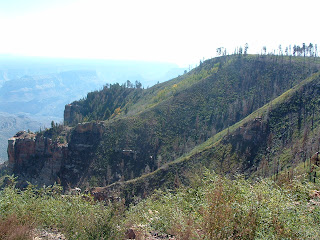 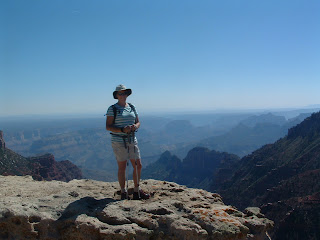 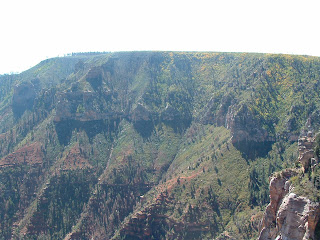 The last three Saturdays I was asked to be the step-on guide for bus tour groups which go to Cape Royal and Point Imperial. It is a three hour tour and as the guide, I talk to the group about the Grand Canyon and surrounding areas. I love being the tour guide...perhaps I should look into a position as a guide.
Three more weeks at the North Rim.

The Bridge and Goodbye

We had many cool cloudy days in a row so Sherri and I decided to go for a hike into the canyon, of course we saw few clouds and it was 90 deg, two miles down. 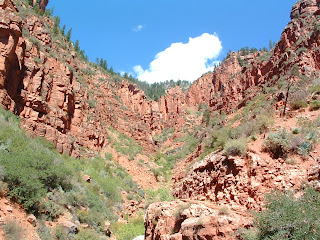 We hiked another mile down to Red Wall Bridge and that was far enough on a warm day. A picture of Sherri proves we made it to the bridge. 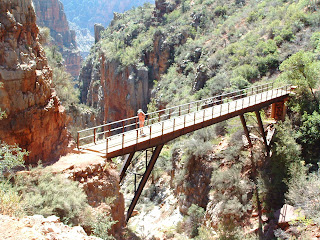 September 6th was Ryder's 4th birthday and September 10th I had a birthday. Ryder was much happier on his as I wound up working 14 hours on mine. Oh well, I've had many good ones in the past and hopefully good ones to come. Here is Ryder with a big smile on his birthday. 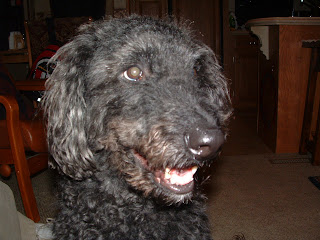 Last Sunday the Gift Shop said Goodbye to our international associates, Rebecca and Sunny. It was a fun pizza lunch but sad to say goodbye to a couple of good employees and great people. 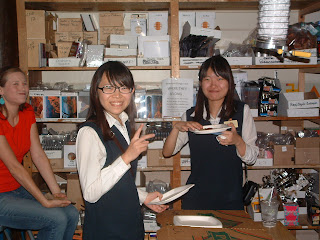 We also said goodbye to Micky, she is one of the hardest workers I have ever been associated with. The final month will not be the same without the folks who left last week. Another international associate, Geeno also finished up this week. Somehow I did not get a picture of Geeno. Micky is pictured below on the right receiving a gift from Jodi. 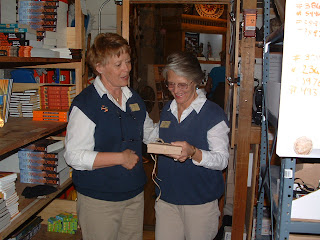 The Gift Shop is now very short on associates and with one busy month to go it will be a challenge. Fall is in the air up here at 8,300' with highs in the 60's and lows in the 30's. The next weather system will probably bring some snow.

My sister Susan came to the North Rim for a visit. We had a good time during her three day stay. Dinner at the Lodge, an evening at the Cookout and an excursion to Point Imperial and Cape Royal highlighted Susan's visit. I am pointing out land marks in the canyon from Bright Angel Point. 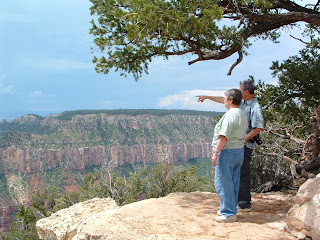 While we were having lunch at Cape Royal this storm developed on the South Rim and came our way. We were able to finish eating before it caught up to us. 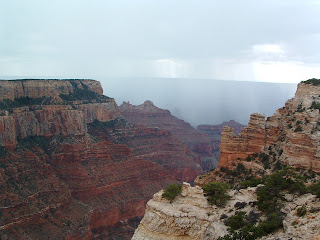 This past week Anthony, Sherri and I headed out through the forest to hike from Swamp Point to the Powell Plateau. About half way there we heard a hissing noise and sure enough the right front tire was going flat. A pointy rock punctured the tire. Anthony and are finding the best place for the jack. 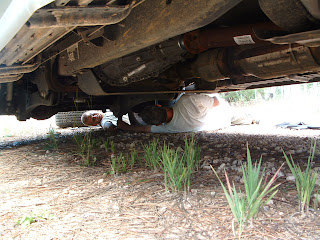 After changing the tire we didn't want to continue as far as Swamp Point without a spare, so we found a remote side road and bushwhacked up to the ridge-line. It was a good hike near Quaking Aspen Spring. 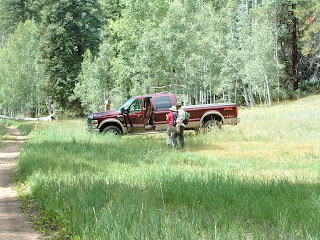 On the way back to the North Rim we stopped at the entrance station to hike up to a fire lookout tower. It was about a mile and a half up an old road. The tower is a historical site built in the 1930's. 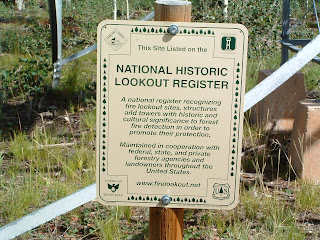 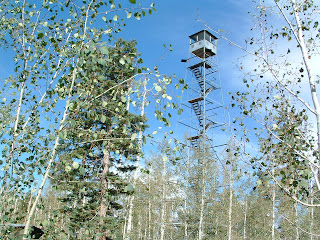 This was the tower where Edward Abbey spent many summers with his dad, girl friends and wives visiting often. He also did a lot of writing in the top of the tower. The house is supposed to be worked on at some point, but now it is in very bad shape. 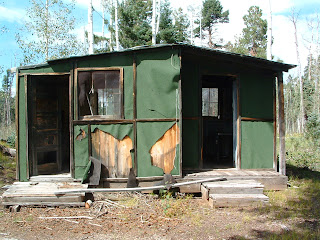 The climb to the top is a little scary, as the railings aren't much at the landing areas but that wasn't going to stop us from making it to the top. Except the door was locked to get into the observation area, still a nice climb with great views. 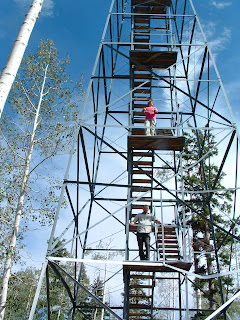 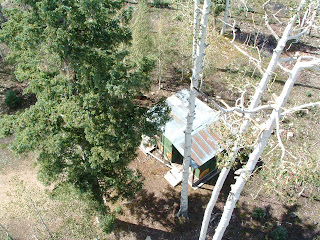 Despite the flat tire, we got in a couple of good hikes and enjoyed our day off.