We are approaching the halfway point in the season. Some are settling into a good routine while others are getting restless. It's a challenge to keep everyone satisfied in a seasonal position in a remote location. I have been fortunate in the Gift Shop to have very little turnover.
Two weeks ago Sherri and I hiked a portion of the Arizona Trail which goes through the National Park. This part of the trail is mostly flat and stays in the forest. The trees and clouds made for a comfortable hike of about 8 miles. 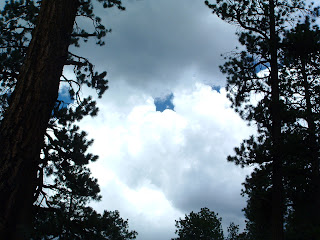 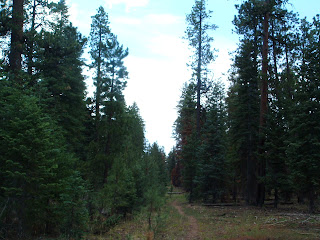 Last week we took the back road to Jacob Lake. Jacob Lake is 47 miles from the North Rim and it is the last outpost of civilization before entering the Kaibab Plateau in the Coconino National Forest. Forest road 22 is a good gravel road with few other vehicles. Our first stop was a turnoff to Dry Park Lookout. The tower rises out of the forest close to two hundred feet. 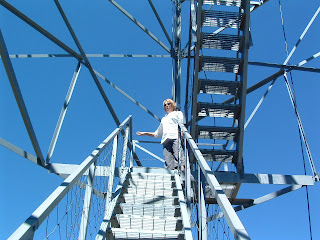 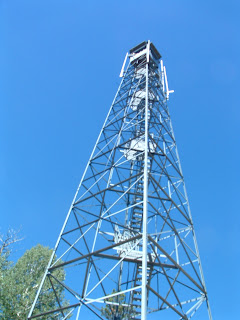 At the bottom is a very nice cabin where the fire observer lives. He was manning the tower when we got to the top and we had a nice conversation with him. He pointed out the landmarks which we could see and talked about living in such a unique location. He also said that Ed Abbey had manned this tower one year. The author Ed Abbey had also been a seasonal ranger at Organ Pipe Cactus national Monument where we spent the winter.
Here is a photo of the old cabin which is now used as storage. The next photo is north toward Kanab, the red hills around Kanab are visible. 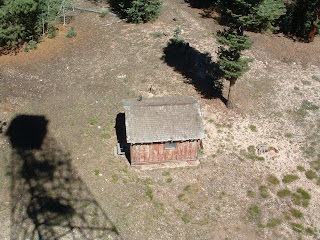 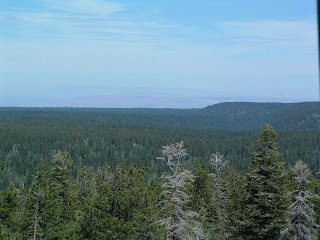 We were glad we stopped and had a nice visit with fire watcher Bill. Driving on a few miles north we stopped at Lookout Canyon and took a short hike. We did not plan on hiking so we did not have gear, nor were we dressed for hiking, but we did have a nice walk in the woods.
After a beautiful drive we reached Jacob Lake. We have been through Jacob Lake many times and stopped for gas or their famous cookies. However, we have never been to the lake. The lake was named after Jacob Hamblin who was a late 1800's Mormon pioneer. These days the lake is no more than puddle in the middle of a meadow. 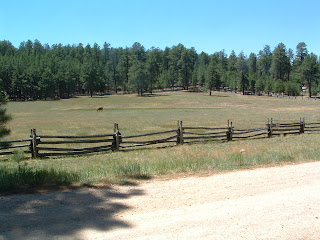 From where I took the picture of the "lake" is one of the earliest Forest Service buildings ever built. 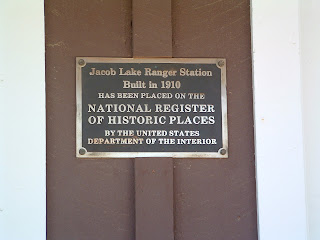 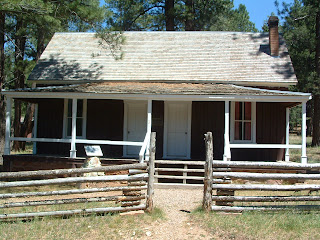 This building was typical of the times, one half was used as a residence and the other side was the office. The caretakers were not in today but we did see the entire Ranger Station through the windows. It was a very enjoyable day and we did partake in the Jacob Lake cookies after we were back home.
Posted by Rorik at 12:33 PM 2 comments:

Tuesday 7/3 we were fortunate to have Jon and Diana take Sherri and I out to Point Sublime in their Jeep. Last year we tried to get out there in our truck but the road is too tight and rough for a full length pickup. We left mid-afternoon for the 17 mile drive, which turned out to be a great time of day to arrive at the point. It takes about two hours to go through the meadows and forests.
The monsoons are starting to get going, although we haven't had any decent rain yet, the clouds are forming every afternoon. The clouds and forest made for a very pleasant bumpy ride. When we arrived at the point, the clouds were thick and photos looked washed out. 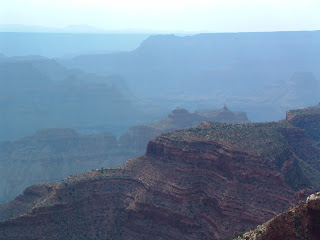 Jon and Diana taking in the views. 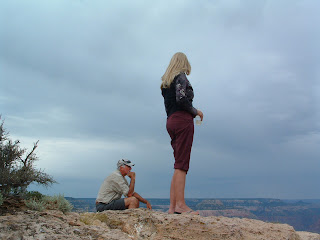 Sherri and I under a wind swept gnarly old pine. 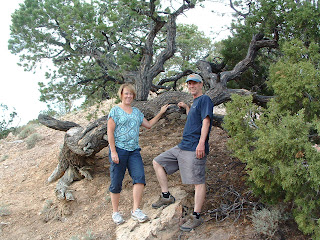 The sun started peeking out through the clouds and I shot some nice photos. 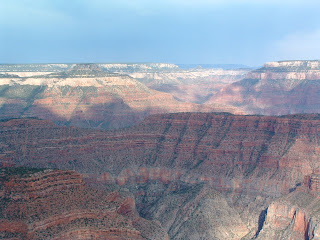 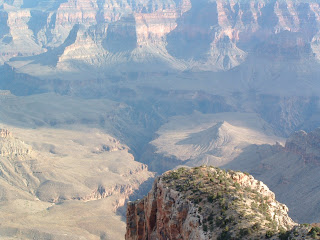 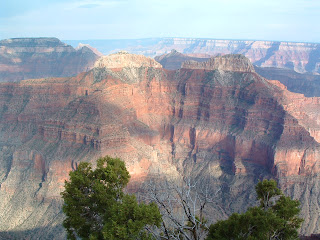 Thanks to Jon and Diana for taking us out to Point Sublime, it's been on our Grand Canyon bucket list for a year. The Fourth was a blast. The parade led by the mules passes in front of the Lodge and water fights are the order of the day. Unfortunately I forgot the camera, I will try to find photos to post from other sources.

As the post title indicates we/I have been on a couple of hikes in the past two weeks. A week ago Wednesday Sherri and I hiked the Uncle Jim Trail. Just as we started out, near the parking lot we encountered this creature crossing the trail. 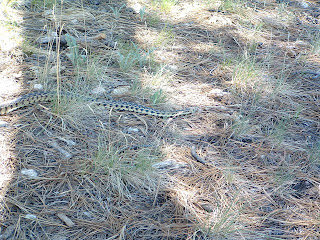 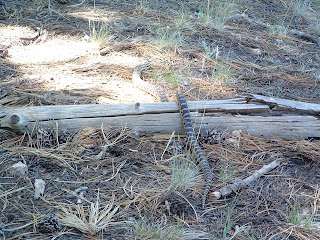 Think it's a Bull Snake, not positive. Uncle Jim is a nice trail along the rim. The warm winds from the canyon blow up to the rim and the warm air allows for such plants as Cliff Rose to grow. Here is Sherri stopping to smell the roses. 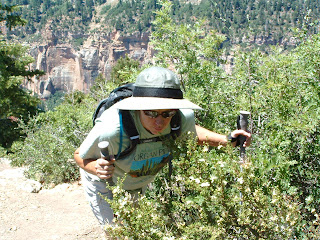 We stopped to have lunch on the rim and enjoy the views. 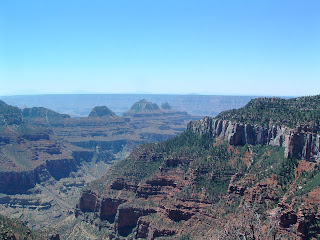 This past Wednesday Anthony and I set out to hike the Komo Trail on the Walhalla Plateau. Well, we parked in the wrong spot and never did find the trail out. So we wound up bushwhacking for 6 miles through the forest. Most of the hike wasn't bad but we did encounter some areas of heavy brush. This ravine we skirted...no sense in going up and down when you can go around. 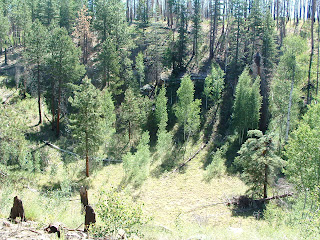 After being lost for three hours we managed to navigate well enough to find the rim and some amazing views over a canyon. I think it is the Clear Creek Canyon. 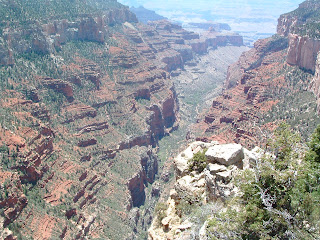 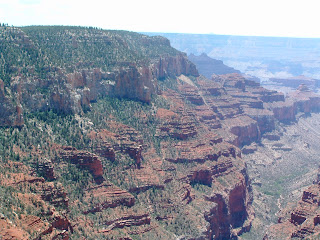 Anthony is enjoying the views. 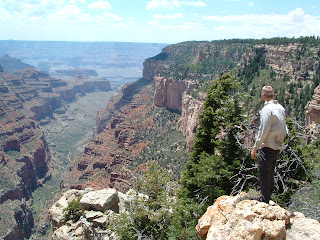 We figured out where we were and found the missing trail. Following the trail back was much easier but when we got to the road we had no idea which way the car was. We walked about 1/2 mile the wrong way and came across a nice tourist parked along side of the road. He gladly gave us a ride to the car. We were glad he did since we had already hiked 13 miles.
The fire danger is now at the highest level. Thunderstorms are predicted for this week. Let's hope we get more rain than lightning or parts of the forest could end up like sections we hiked through. This fire was six years ago and created some eerie landscape. 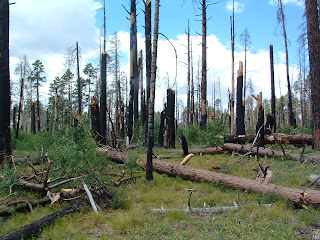 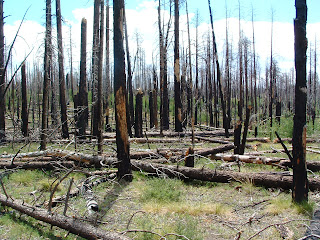 Hope everyone has a safe and Happy 4th of July!!! A parade is scheduled near the Lodge, we are hoping to get rain on our parade.
Posted by Rorik at 1:01 PM 2 comments: