Busy getting ready for tonights 45 minute evening program. We haven't hiked or done too much for the past couple of weeks. I think I'm ready for tonight, I'm sure we will have photos to post soon. Sherri did get a couple of photos of me conducting the Ajo Mountain Van Tour, ten visitors on a three hour tour. 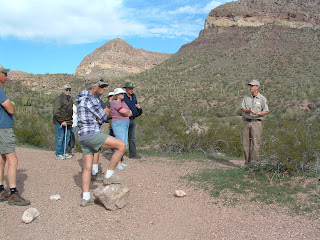 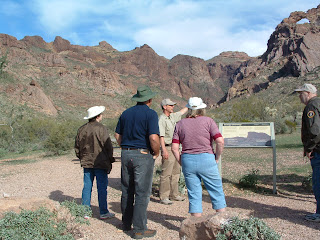 On our day off last week we did go down to Sonoyta, Mexico for dinner. Sherri and I went down early with Brian and Hilda. We walked around for awhile to check out the sights. Here we are on the Plaza. 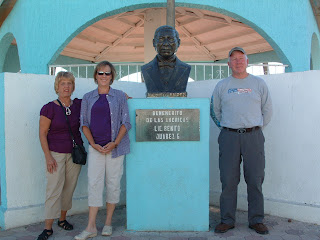 The church is undergoing a facelift and had a service going on inside, so we didn't get to see all of it in its full glory. Here are Sherri and I on a cholla skeleton love seat. 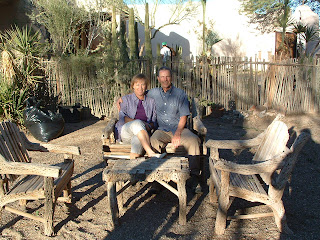 The bell tower under renovation. 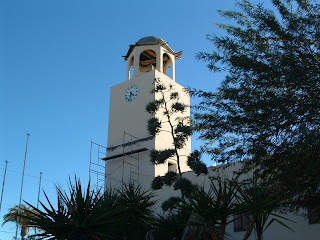 The Priest's house and offices. 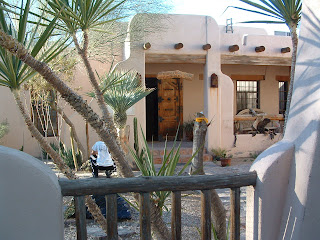 We met 12 other volunteers for dinner at Zarape's, an open air restaurant. Janet, in the white vest, works at the Monument's Visitor Center and is a citizen of both Mexico and US. Janet was our host. 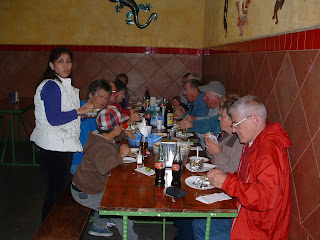 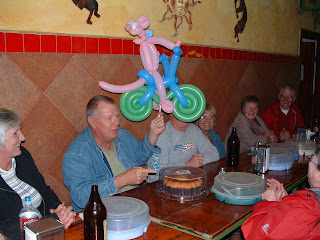 It was Jimmy's birthday so Janet ordered cake and balloons. Sherri with "Mini Maus", close enough for a Mexican street vendor.
We had a great time and ate some wonderful Mexican Food. We are planning trips to Sonoyta every couple of weeks.
Posted by Rorik at 3:03 PM 2 comments:

Monday Sherri and I set off to finish a hike we attempted after we first arrived at Organ Pipe. The weather was much better this past Monday than the first time we tried to hike to the arches. Our goal is to reach the top of the arches. 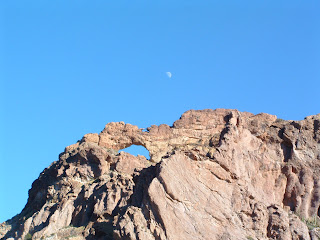 Coming up the back side of this ridge is very steep and a lot of loose rock. We did make it up to the top, just to the right of the moon. Sherri is coming straight up. 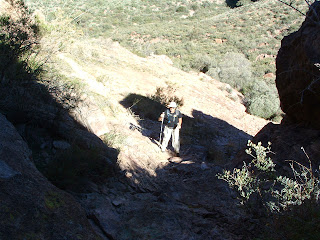 Great views at the top; the road and parking lot are below. 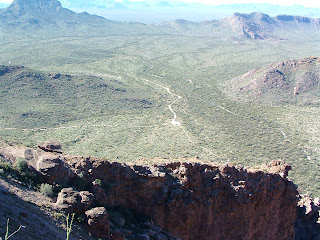 Just down the road from the arches an employee had told me where to find petroglyphs, so Sherri and I took another hike and found the rock art. Pretty Cool!! 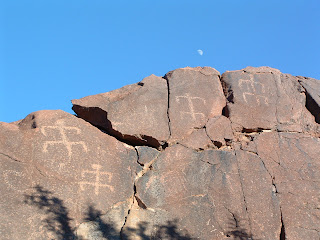 Tuesday morning I was a late addition going out to Bates Well to put the pronghorn fence back up. It was taken down last week to release five males. Two Natural Resources employees, Amy and Ed, are trying to find the released males on radar. 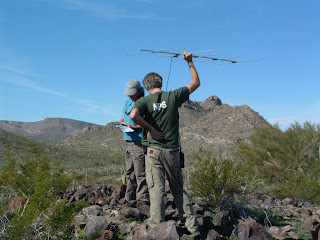 To get to Bates Well we went through an area closed to the public, there is an old ranch house along the road. Armenta Ranch is on the northern edge of the monument. 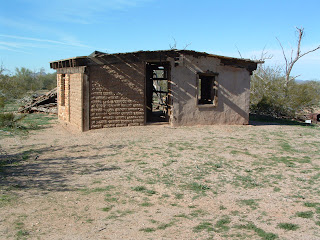 The pronghorn enclosure is in an open area and not much to look at. We put the 300' of fence back up in a couple of hours and took a tour of the ranch at Bates Well. This house is the last occupied "private residence" on the monument. Bobby Gray lived here until 1976. 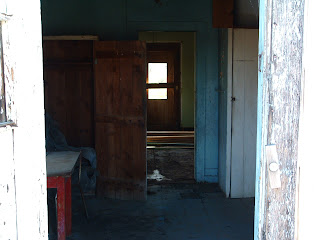 Wednesday brought another hike up the old road between Ajo and Sonoyta, Mexico with a couple of other interps, Brian and Hilda. 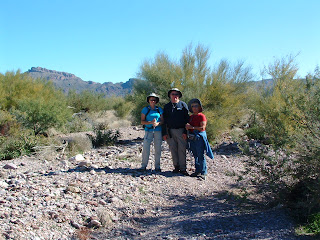 The hike is a mainly flat nine miles. There is a very interesting Christate on a saguaro cactus, we all thought it looked like a camel. 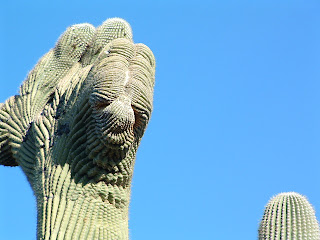 Thursday was a big day. We were up at 3:30am to drive with three other volunteers to the 640ac breeding pen for pronghorn. A few years ago there were only 22 Sonoran Pronghorn in existance, today the numbers are up to 250, but still very much an endangered species. Five males had been transfered to Bates Well pens and released. Today the hope was to transfer up to eight pregnant females to Bates Well. This is accomplished by first herding the pronghorn into holding pens, called bomas. Then the pronghorn to be transferred are sectioned off in the boma. To capture the pronghorn eight people holding a net go into the boma and the pronghorn is wrestled to the ground and the veterinarian gives the pronghorn a shot of anesthesia. The pronghorn then is brought out on a stretcher and is processed. 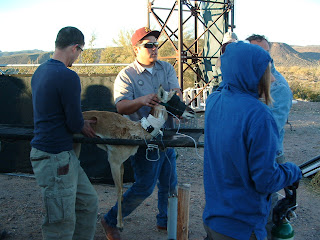 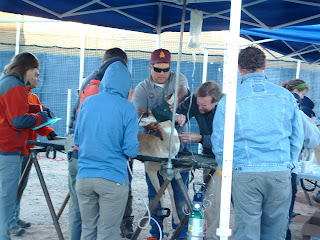 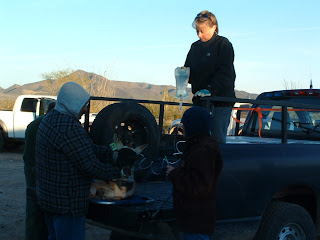 It is an incredible operation which we felt very honored to be a part of, unfortunately two of the four died before being transported....very sad. The thought was a change in the anesthesia cocktail was causing the problem. Friday they were able to transport four more successfully, so the hope is six pregnant pronghorns can be released into the wild. We will be involved some more in this program when we go out to Bates Well again to monitor the released animals.
The interpretive programs started today and Thursday is the start of our presentations; it is almost show time so we better be ready.
Posted by Rorik at 7:55 PM 2 comments: