In the last post I had completed a rim-to-rim hike with no pictures, since I forgot my camera. Anthony, my hiking partner took a few pictures with his phone so I'll post one in front of Phantom Ranch. 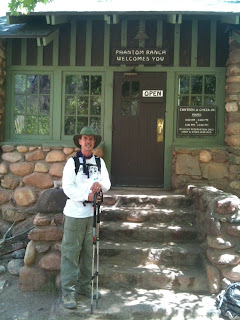 The North Rim has been open a month and everyone is settling into their positions. We are very busy since school is out and more families are taking day trips to the park. We have also hit the point where some employees believe the grass will be greener in another department. Overall I have a great group in the Gift Shop and I don't have to worry about a few malcontents. Managing employees who live and work together makes for interesting issues. 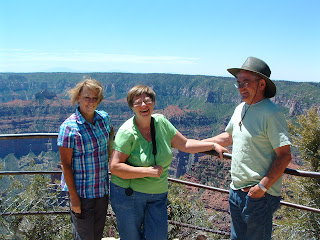 John and Carol paid us a visit this past Wednesday. John and Carol were fellow volunteers this past winter at Organ Pipe. Recently they have been volunteers at Bryce Canyon, right up the road from the North Rim. Wednesday is a day off so we were able to play tourist with them and had a great visit. Above, we are enjoying the view from Point Imperial.
From Point Imperial we headed up to Cape Royal for a picnic lunch on the rim. 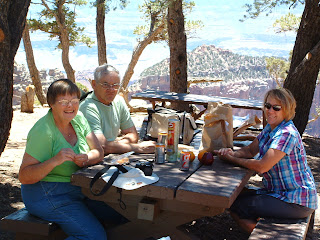 Sometimes it takes visitors to get us out and about. After spending last summer on the North Rim we sometimes feel like we have been there-done that. Hope all the dads have a good Fathers Day and I will leave this post with a photo of the Colorado River from Cape Royal. 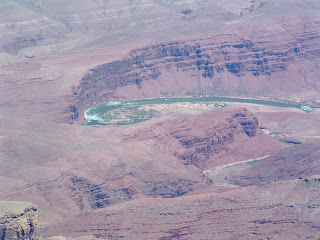 Last post I mentioned that Anthony, the Assistant Gift Shop Manager and I were going to hike rim-to-rim and that I would be posting lots of photos. Tuesday morning at 5:00AM Sherri drove Anthony and me to the North Kaibab trail head and off we went. About 3/4 mile into the hike I realized I forgot the camera, so much for posting a lot of photos. Instead I will have to write about the hike and if Anthony ever emails the few photos he took I will post them at that time.
The temperature at 5:00AM on the North Rim was 32deg. with a gusty breeze at times. Not wanting to carry jackets made it very cold, but cold would feel great in a few hours. We arrived at Phantom Ranch in 5 1/2 hours. The 14 miles downhill was fairly easy and uneventful. After a break we were on our way by 11:00AM and glad we were making good time.
The first two miles toward the South Rim is flat and parallels the Colorado River. Then it starts uphill and the sun was shinning down with little shade. Our pace quickly declined and we stopped often in what little shade we could find. At one point a back country ranger was concerned about Anthony since his face turns very red with exertion. We pressed on and made it to Indian Gardens by 2:00PM. We still faced the steepest climb for 4.7 miles and the temperature was 90deg. in the shade, plus we would no longer be hiking along Bright Angel Creek which was a great place to soak our shirts and bandanas.
After a nice break we went off to struggle uphill. A struggle it was, at times my mouth remained parched no matter how much fluid I took in and my legs were cramping. By 4:30 we still had two miles to go uphill, but a great thing happens at that time. The rim now offers shade on the entire trail for the final ascent. We made it to the rim at 6:04PM, a 23 mile hike in 13 hours. We were quite proud of our accomplishment and celebrated with steak and cocktails at the Arizona Room, a very nice restaurant right on the South Rim.
We stayed on the South Rim at the Maswik Lodge. Despite some soreness we were able to play tourist for all of Wednesday morning. Anthony had never walked around the South Rim and he was amazed by the different atmosphere on the South Rim in comparison to the laid back North Rim.
We caught the Trans Canyon Shuttle back to the North Rim at 1:30PM and arrived home at 6:00PM. Thursday it was back to work for both of us, with many stories to tell.